Sauve and the pitchfork. 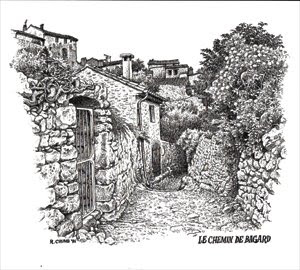 Sauve is a well-preserved medieval village perched on the edge of the Vidourle river, whose importance at one point in history, it is said, briefly rivaled the city of Nîme's. This is hard to fathom in the twenty-first century, ghosts of royalists and warring peasant camisards nothwithstanding.

One of its two remaining claims to fame is that among its current residents is a cult hero to comic book enthusiasts, the subversive R. Crumb. I found this notion somewhat hard to swallow, given his American, LSD-fueled past; do underground comic book artists ever mellow? The satirical 1972 film which features his priapic Fritz the Cat left a strong (on the shocked side) impression on me. It was the first-ever officially X-rated animated film.

Of course there is far more to his body of work than this character, but Fritz became R. Crumb for me, even if Crumb himself heavily objected to how Felix been changed in the movie adaptation. At any rate, my doubts about his Gard residency were dispelled when I saw this 2007 sign fighting the hypermarché-ization of his quiet village. Note the grabby R. Crumb hands of the big-box store going after everything within reach. 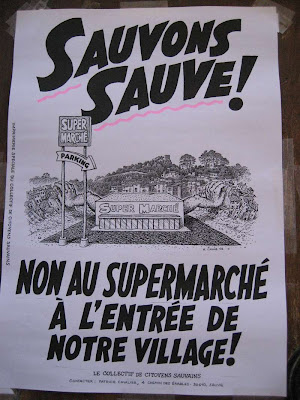 This successful campaign (which received national and international coverage) helped make for a lovely stroll today as I took in the sights and sounds of the Fête de la Fourche et de la Cerise, or Pitchfork and Cherry Festival. Seriously. Sauve was known for its cherry production, which is today only a memory--even the heirloom variety having disappeared. Its pitchfork production stretches back some 1000 years and is still going on today, however, and is Sauve's second claim to current fame.

Sauve is the only remaining producer of these pitchforks in Europe. In the 1800s, production levels were at some 10,000 annually, made by some 300 workers, while today it consists of 300 per year made by two craftsmen and further subsidized, judging by the prices; but still. The old ways persist. 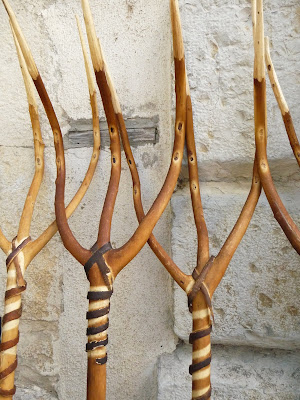 The particularity about these lightweight yet sturdy wooden pitchforks is that they are grown. That is, they are cut from European hackberry elm bushes (celtis australis) which have been intensively shaped by finely calibrated pruning. (If you play a wind instrument, fish, ride or enjoy a good walking cane, you may have already handled its very resistant wood). Allowed to grow naturally, it can reach some 25 meters, but in Sauve, they manage the bush's growth, capitalizing on its natural tendency to grow a three-pronged fork. 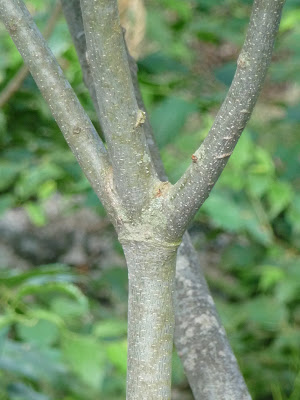 For a working hay fork, this takes eight years on the bush, with well-gauged pruning all the while. If more than ten days lapse without trimming, the year's harvest can be lost. Once the fork is ready and cut from the bush, it is transferred to a 100 C oven, where as the sap sweats out, the branch warms and becomes flexible. The bark is then easily stripped, and after adroit adjustments (all this using the original, highly specialized tools), the branch is returned to a warmer oven in which it is hermetically sealed and smoke-cured for a day, resulting in its light brown hue. 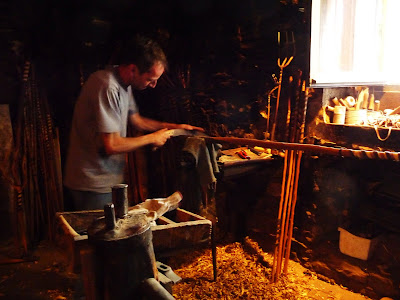 The distinctive striping is a Sauve identifying mark made by tying a narrow strip of bark to the branch before it goes in the kiln. After the second bake, the fork is further adjusted. It then spends a year air-curing before being ready for sale. 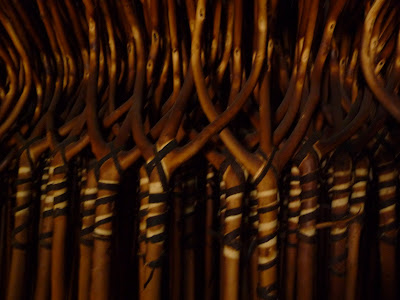 I didn't stay for the cherry and hackberry pit-spitting contests, nor could I hang around for the crowning of the 2009 Miss Cerisette and Mister Forcaïre, but I didn't go home empty-handed. In addition to a bag of cherries (a different variety from the ones in the garden), I walked away with a fourche of my own. 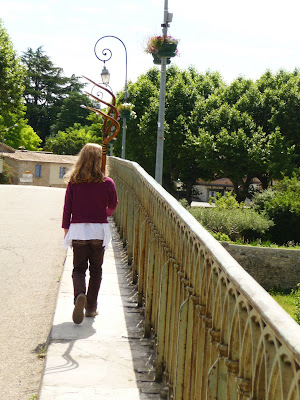 Thanks for visiting my blog and joining in the conversation!

some of my favorite recipes.

successfully converting in the kitchen.

kindly note that unless otherwise attributed, all text and photos are copyrighted by the author.

some things I write about.

restaurants I fell for.

some of my favorite sites and blogs.